Duck-billed platypus are well known for their complete and utter weirdness. So many people are confused on what a Duck-billed platypus actually is, and the majority of people even think it is some type of myth. However, this funny looking mammal is not a myth at all! It is very much alive and can be found living in Australia and Tasmania. Grouped up with the 4 species of Echidna, these little mammals are called “monotremes” and this group is known for their ability to lay eggs.

The Duck-billed Platypus is the only member of its genus and family, and when they were first discovered in 1798, scientists thought it was a hoax. Scientists had literally thought it was multiple animals sewn together and were baffled by the beaver tail, duck-bill, and their otter like feet and fur. Due to this observed mix of random animals the duck-billed platypus has been a large focus of evolutionary biology.

Duck-Billed Platypus are not only icons on the Australian content, but they are also one of the few venomous mammals in the world as well. Male duck-billed platypus are equipped with a spur on their hind feet that is capable of transferring a venom that is quite painful for us humans. After their discovery in 1798, the Duck-billed Platypus were hunted for their fur. Since then they have been regarded as an interesting and valuable species and are protected in their native home range.

Is the platypus extinct?

They are not extinct. In fact, the Duck-Billed Platypus is only “near threatened” by the IUCN and are doing quite well in their range. Mostly affected by pollution, the platypus does have a few other issues they need to face, like hunting and loss of habitat. Many Australian zoos, authorities, and wildlife sanctuaries have been working hard to protect these animals in their native habitats. It looks like we will have the Duck-Billed Platypus around for a while.

Do platypus have teeth?

Just like all our other friends with duck-bills, the platypus does not actually have teeth. These otter like mammals will dive under the water and use a tool called electroreception. This is the ability to sense electric currents under the water. Once they have located their prey, the duck-billed platypus will use their bills to scoop up the prey and then hold them in cheek pouches as they head to the surface. Once at the surface, they tend to smash and mash up the prey before eating it. Even though they have these great evolutionary tools for finding prey, life without teeth can still be tough. So, they will actually pick up little pieces of rocks, mud, or gravel from the bottom of their watery habitat to help them with chewing and breaking up their meal. How cool is that?

How poisonous is a duck-billed platypus?

The Duck-billed Platypus is not poisonous at all. Poison is something you ingest while venom is something injected into you. So, in fact, they are venomous.  However, only the males are considered venomous because of the spur on their hind feet. This spur on their hind feet can deliver a venom to any predator or human trying to mess with him. It is not a deadly venom to humans, but it is known to be rather painful for humans to handle.

Is the duck-billed platypus a good pet?

The Duck-billed Platypus is by no means a good choice for a pet. In fact, we have not had the greatest success when it comes to breeding and caring for platypus in captivity. It wasn’t until about 2008 that certain Australian facilities started to show success in the care of the Duck-Billed Platypus. As of today there are only two facilities that have bred them in captivity. These are Taronga Zoo and the Healesville Sanctuary, both in Australia. As of 2017, there are ZERO Duck-billed Platypus living anywhere else but Australia and all attempts to move them to zoos in other countries have failed. If you really want to see a Duck-billed platypus in real life…then you are going to have to head to Australia!

Be sure to stuff your brain with loads more animals facts and head over to the kids zone. We have videos, games, animal quizzes, and lots of other animal activities for you to enjoy. See you guys there defenders! 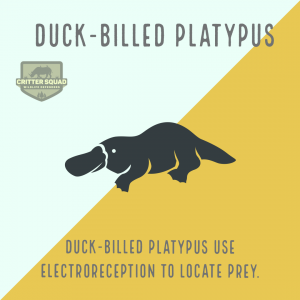 Chinchillas | Hangin’ With The Best Of Them!

A Symbol of Greatness – The Elegant Bald Eagle!